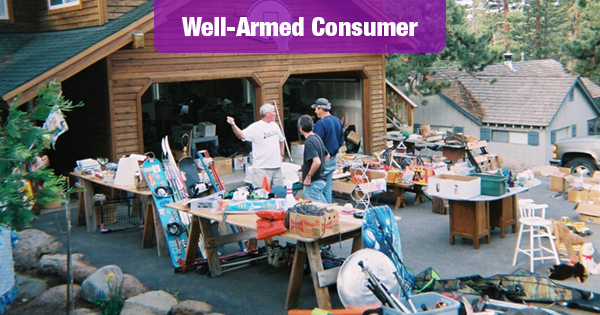 As the timing for spring cleaning approaches, and the Marie Kondo movement continues to inspire people to clean out things they no longer use, a survey from OfferUp – a mobile marketplace for local buyers and sellers -- found that half of Americans plan to resell their gently used goods to support their income this year.

There's almost a trillion dollars’ worth of unused items inside American households today, and interest in re-commerce is growing as more value-conscious millennials look to save money and find deals. Online marketplaces like OfferUp help people more easily sell the things they don't need and find things they want at a better value.

Need some help paying for your spring and summer projects? Visit our Home Equity page now!

Do You Clean Like Your Neighbors? The survey found:

We hide our stuff in closets and garages.

Did you know... 62 percent of Americans say they have filled a closet with extra stuff they're not using, while "take up space in my garage" ranks second (41 percent).

Vast majority plan to spend at least an hour cleaning.

Tidiness is important in our relationships.

About one third of Americans (34 percent) say that their partner/roommate's tidiness is very important. And 32 percent of Americans say they would rather wait in line at the DMV while 25 percent would rather spend time with their in-laws than have an argument about decluttering.

We start cleaning the bedroom first.

And 48 percent of Americans say the bedroom is the first room they declutter.
Functional home offices and guest rooms are the goal. 29 percent say they would use a decluttered room or space in their home as an office, while 26 percent opted for a guest room.

Sometimes, we clean house because company is coming over.

About 43 percent of Americans declutter because visitors are coming over, and 40 percent say they declutter when moving to a new home/apartment.

One man's stuff is another man's treasure.

Americans believe they can make the most money by selling electronics, cell phones, and computer equipment (24 percent), clothing and shoes (25 percent) and vehicles (25 percent).